The Natural Park Desfiladerode los Gaitanes is located in the centre of the province, between the municipalities of Álora, Antequera and Ardales. It is one of the most spectacular landscapes of the sierra malagueña (Malaga mountain range).

The Kiosk, an area where several parking areas have been adapted (one paid), and also very close to a recreational area (camping, nautical activities, picnic area, restaurant, cafeteria, drinks, WC) 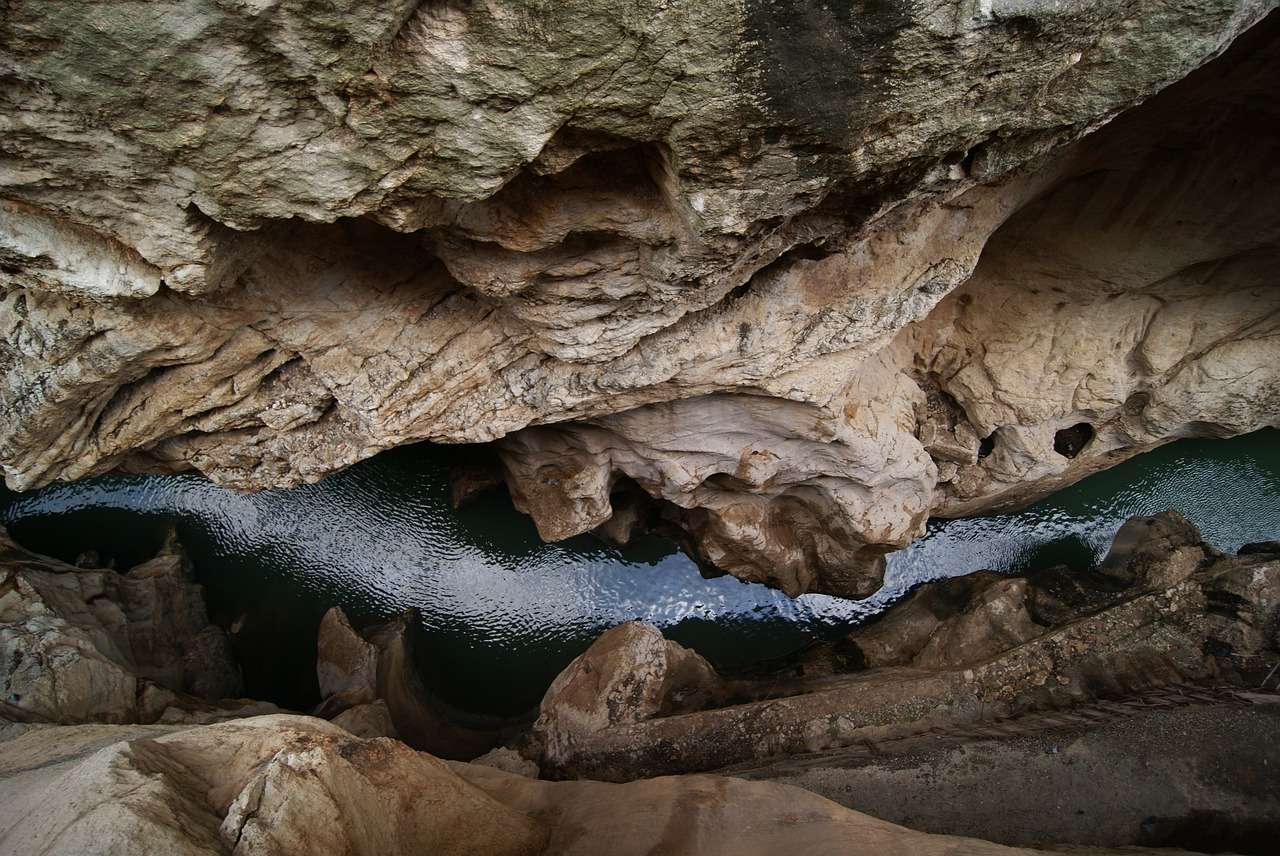 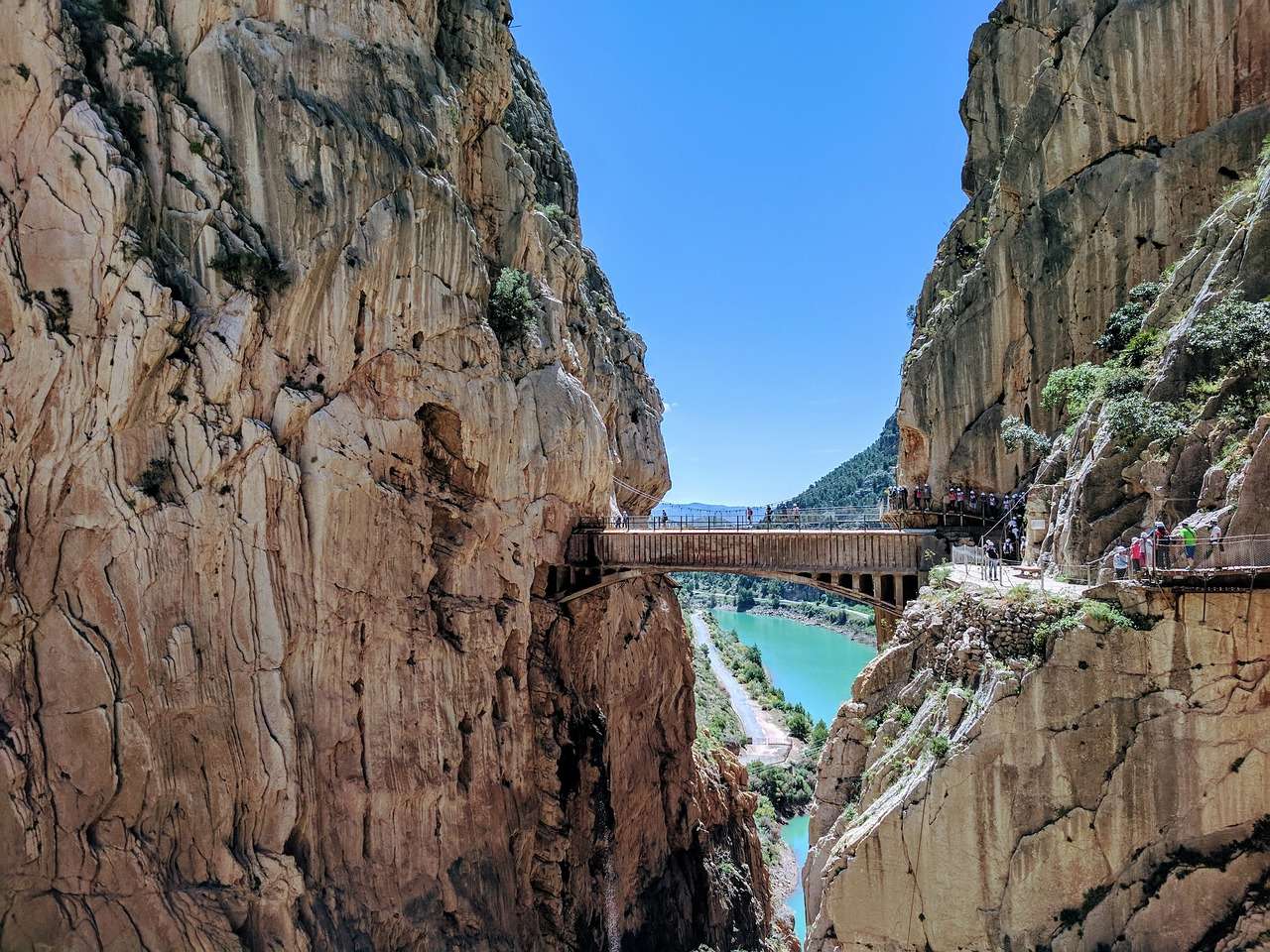 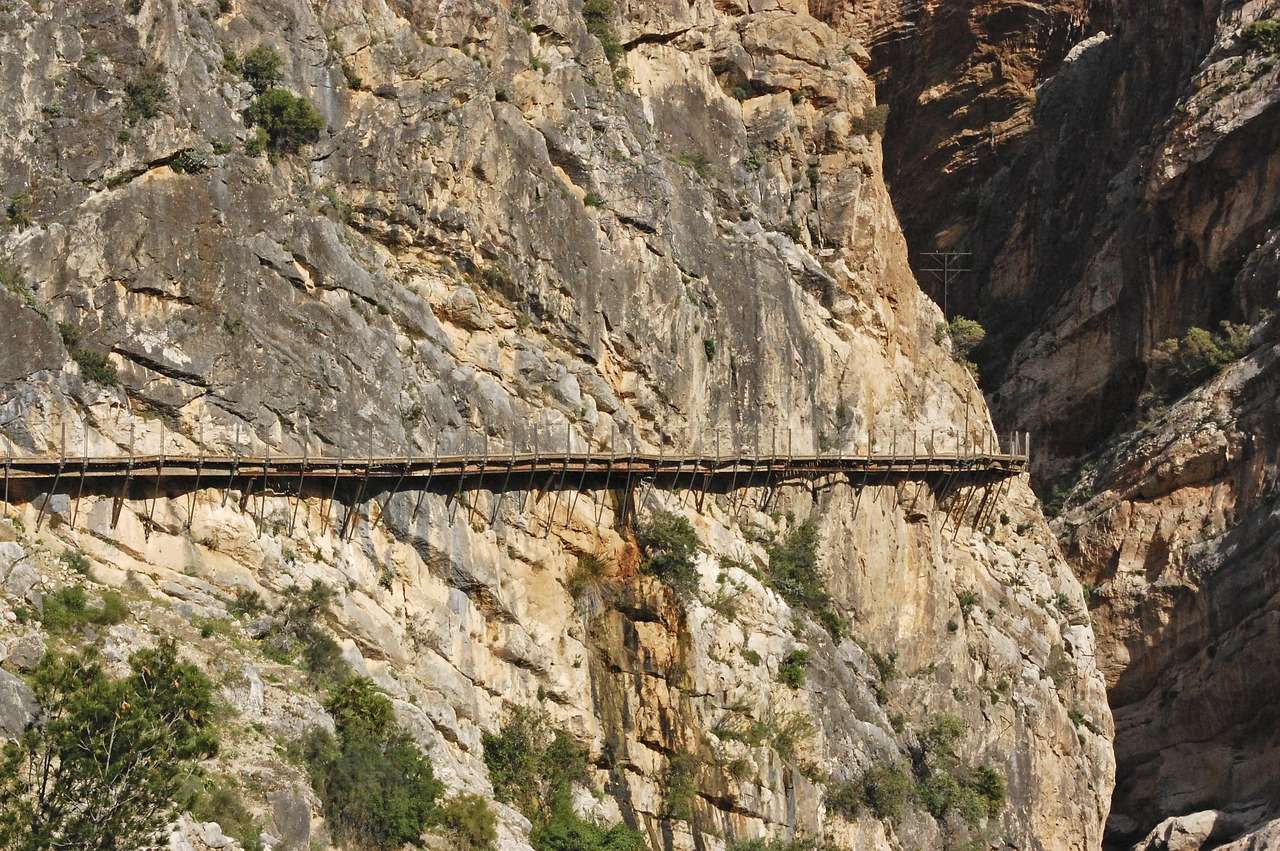 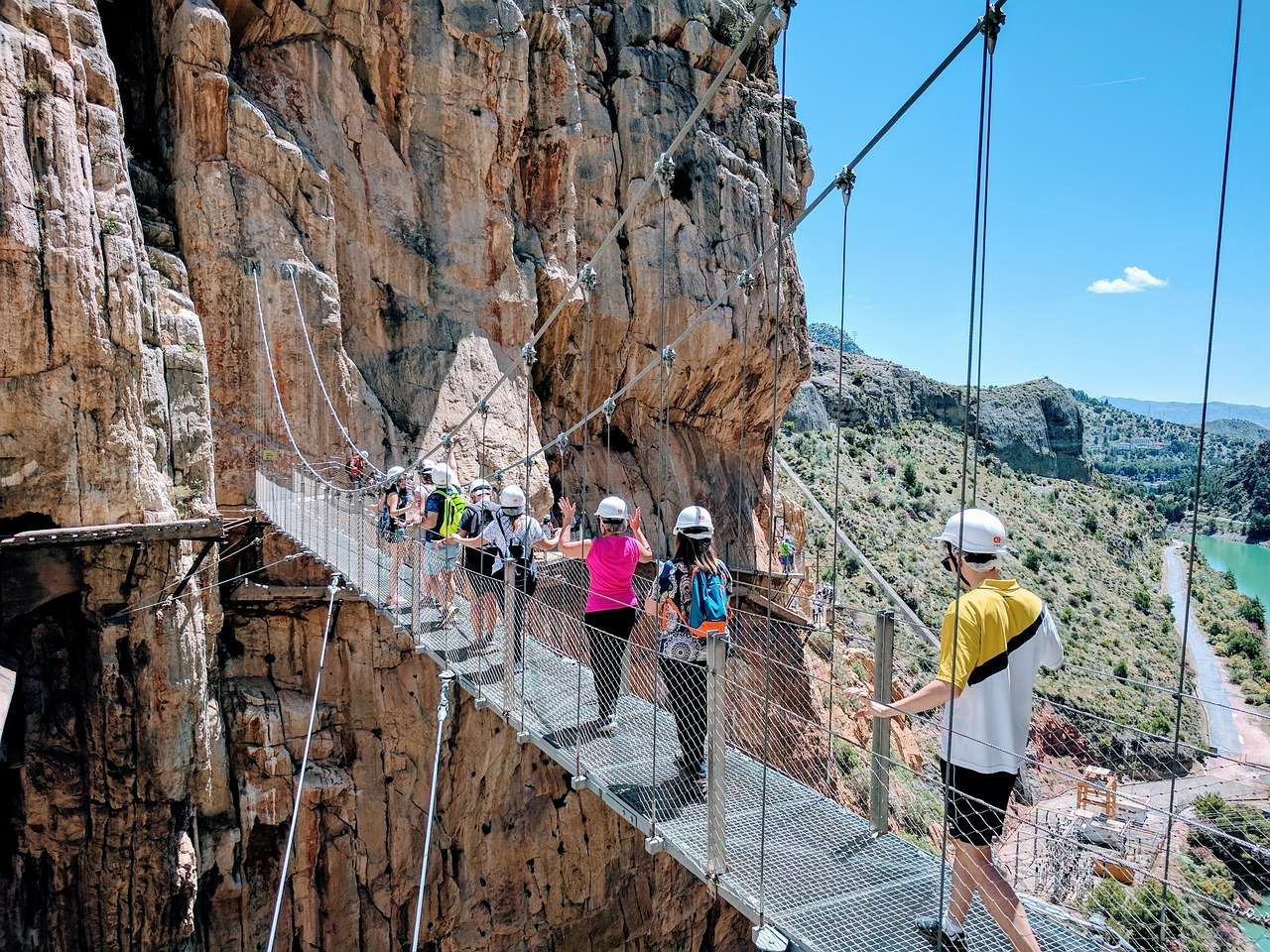 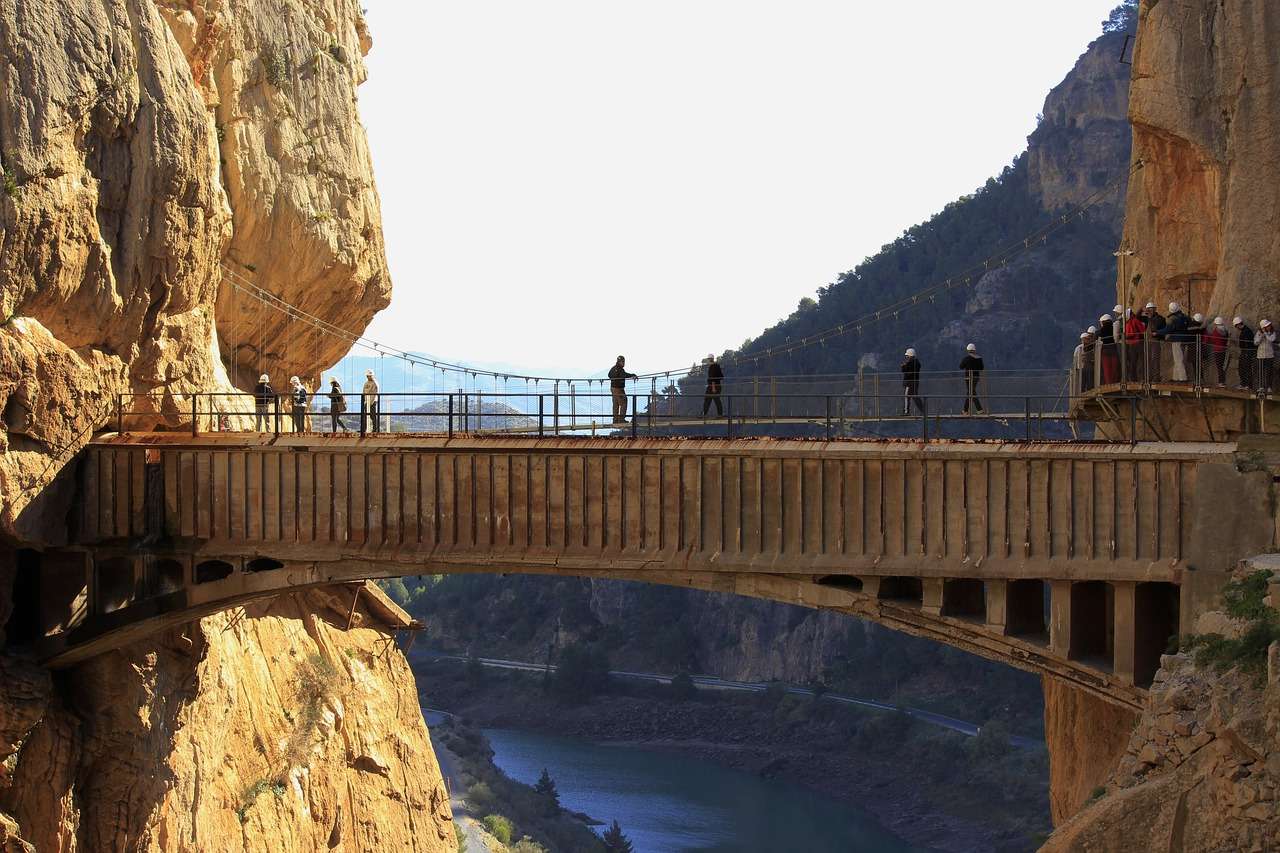 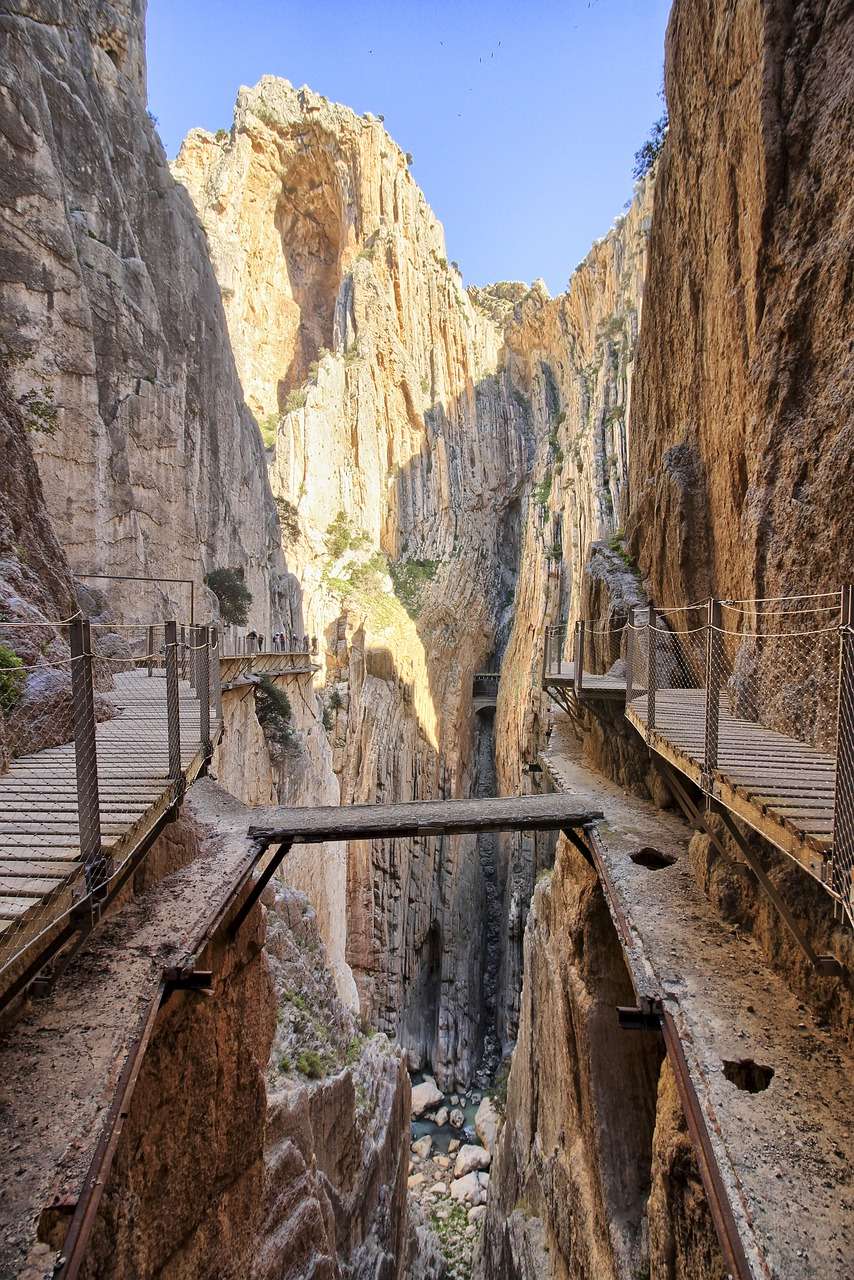 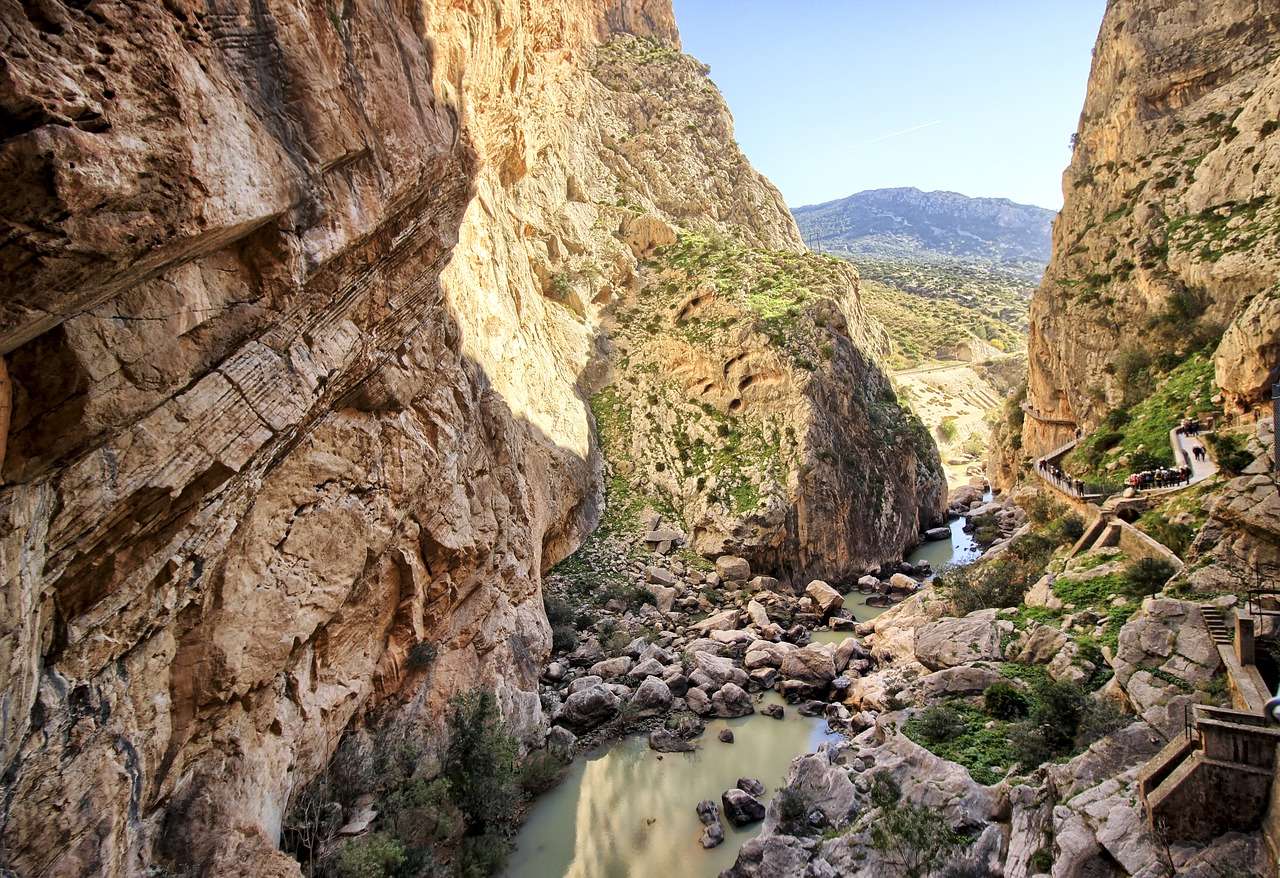 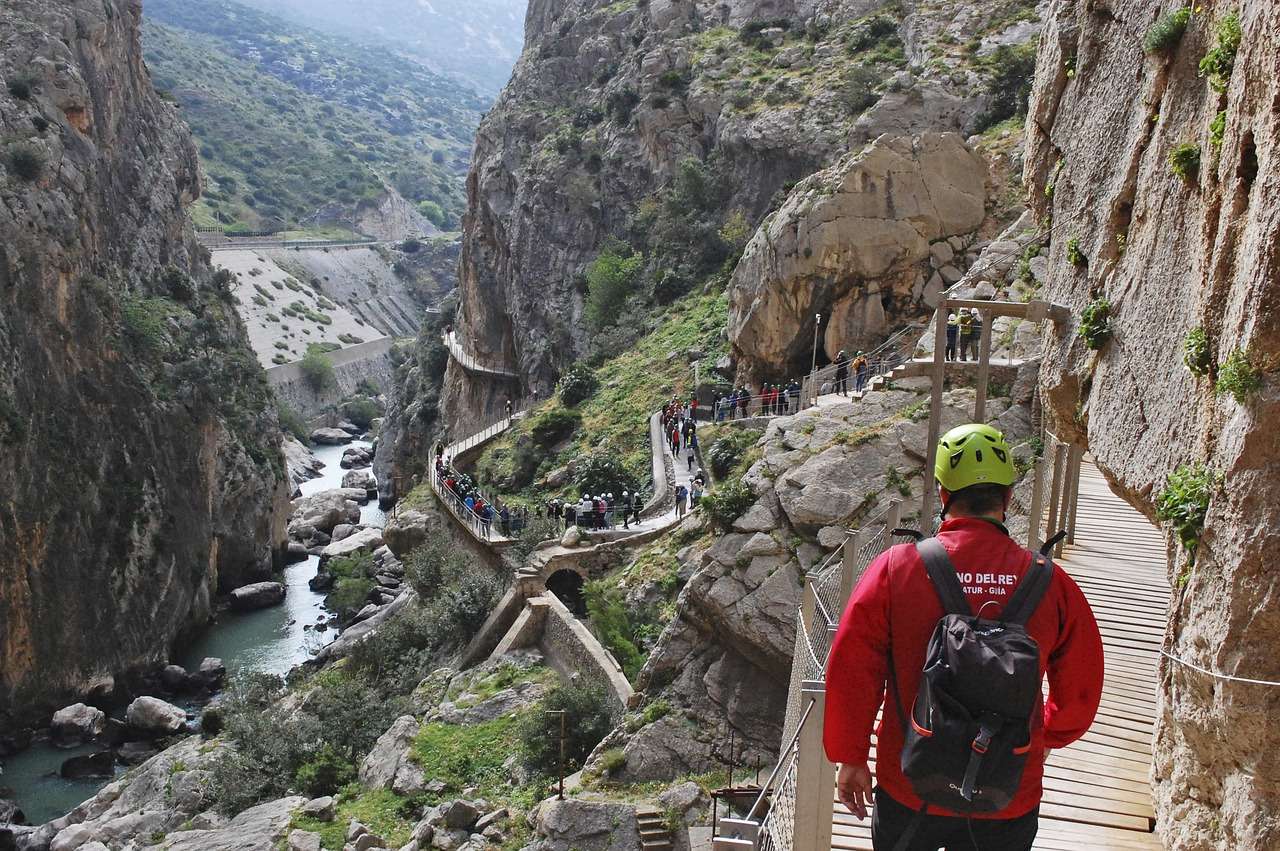 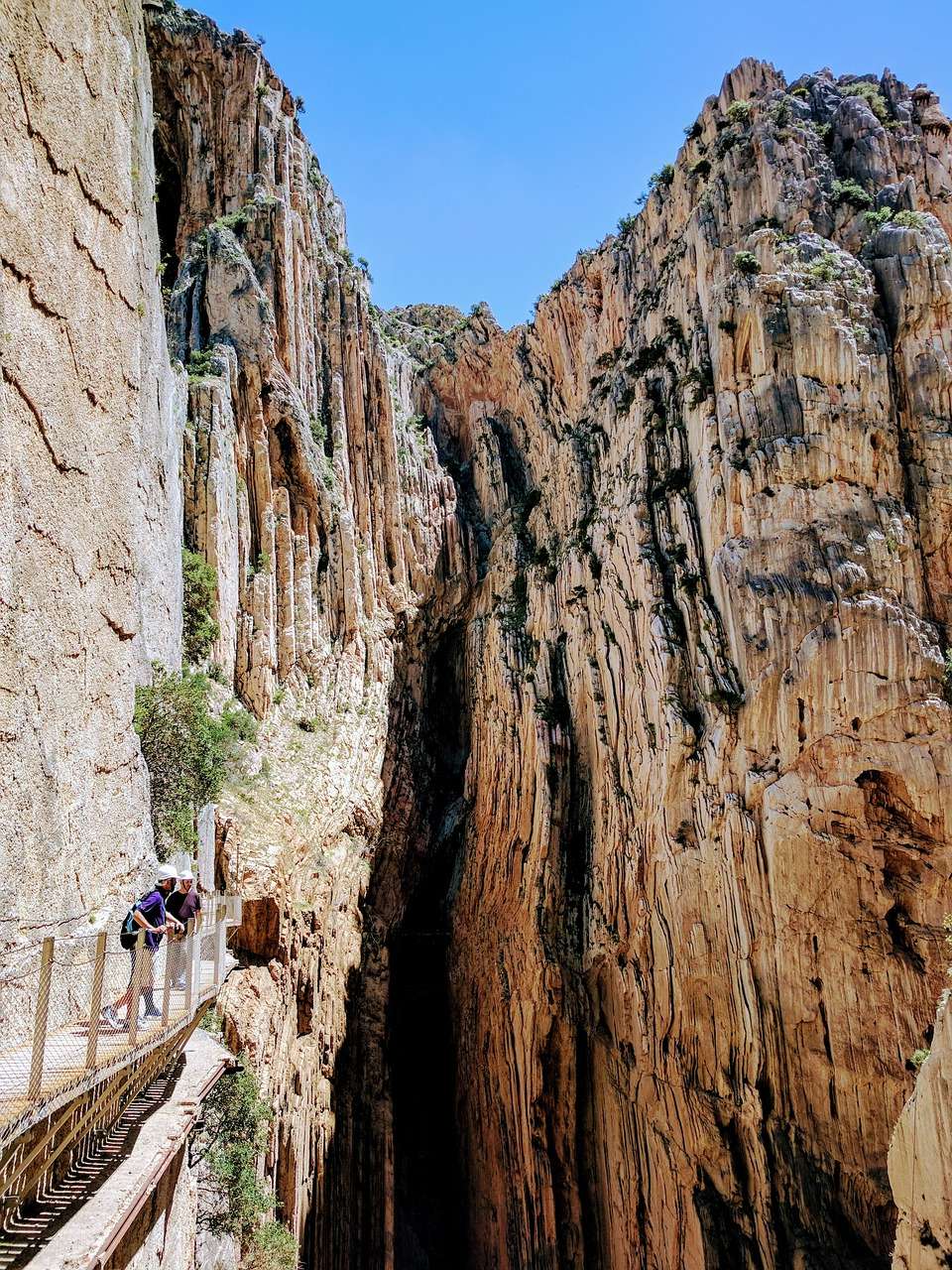 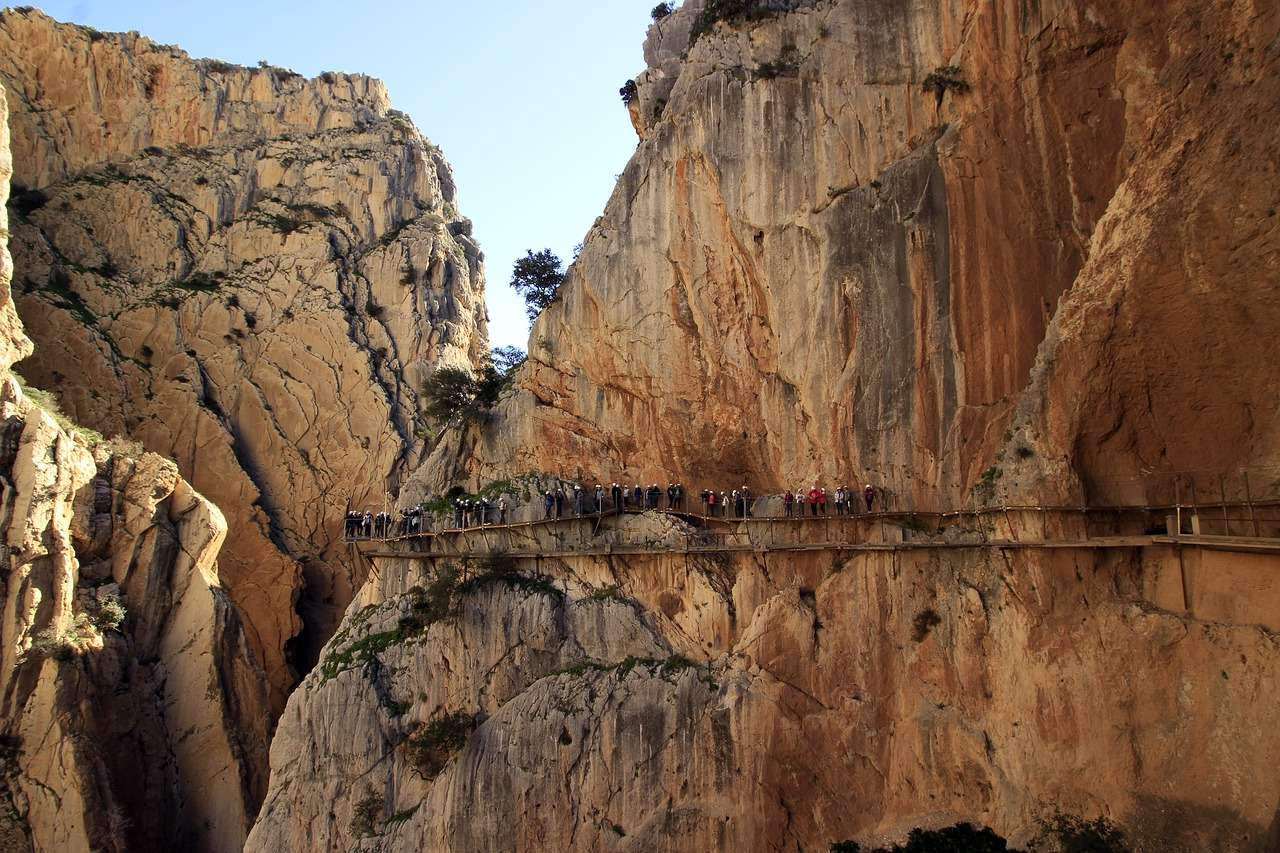 The Gorge Desfiladero de los Gaitanes is a natural beauty spot, placed in the centre of the province, between the towns of Alora, Antequera and Ardales. This is one of the most beautiful spots of the Malaga Mountains. Between its steep and considerably high walls, the River Guadalhorce flows, after having passed through the reservoirs El Chorro (The Spurt), Guadalhorce, Guadalteba and Gaitanejo.

The Gaitanes Gorge is a canyon, carved by the river Guadalhorce in the territory of Álora, which at some points is only 10 meters wide and 700 meters deep. The nothern access to it is via Guadalhorce reservoirs and the southern is via El Chorro.

El Caminito de Rey hike is spectacular all way long: from the Count of Guadalhorce Reservoir to its end at El Chorro Dam. Placed in unique natural surroundings, the path stretches between two gorges, canyons and a large valley, along pathways or boardwalks. All the texts about the path, as well as the photos and videos that follow, were created after many visits of our experts to the site, and their hard work that had lasted for several months.

The route is linear, not circular, and it goes in one direction, downwards from the north to the south. Its beginning is in the Town of Ardales and the end in Álora. This route is almost 8 km long, and takes from three to four hours to be crossed. As we consider it to be rather unique, we decided to describe all of its parts so you could understand what can be seen or felt along the route.

The path and the track of Gaitanejo (2.7 or 1.5 km, according to chosen route)

Visitors and reservoir of Gaitanejo

Gorge of Gaitanejo (2,9 km from entrance to exit)

The valley of the Pit

The river, after great gullies and rapids, produces great noise.

A runway until the exit corner

HOW TO GET TO

Come to our reception and you will be informed about this amazing and beautiful activity, or ask for more information in our contact form.

We want to offer you the opportunity to belong to our Club of Preferred Clients of our accommodation...

It had an initial fleet of 80 vehicles with manufacturing date between 1898 and present...

Nizar Ksiri
17:45 25 Feb 20
The room pictures are misleading, the rooms are unclean(looks like none of the sheets have seen a wash in weeks - gross... looking stains on every bed) and dust is practically flying out of the couches every times you try to sit on them. Do not come here!read more

Hannah Young
22:24 31 Oct 19
A fabulous modern residential complex. Clean and safe. Lovely houses and apartments and incredibly close to the beaches... and nightlife. Even has a great big supermarket on site as well as playground, health food cafes etcread more

Nick Farmer
08:58 27 Oct 19
Unfortunately what would have been a positive review has been overridden by the fact that our rental property was... accessed whilst we were out for the day - it would appear by someone with the ability to override the house alarm system and then get into the safe - and our jewellery (some of which had great personal value) was stolen. On further investigation there was also a faulty window lock, which shows that overall security is a major issue. When we contacted the on site emergency on call number at 9.30pm ,as we had no idea what to, we received virtually no help or support - 'disinterested' in fact , which seems to imply that this may be a common occurrence. On arrival back in the UK we emailed a formal complaint, but as expected no response received - despite the fact that circumstantially it suggests that there clearly are thieves at work and possibly on the staff team!! Shame really as it was, overall, a nice holiday property in a good enough location.read more

SV NootdorpMDWF
13:20 23 Oct 19
We enjoyed our stay very much in the penthouse apartment which was close to the Supermarket. We had a little late... arrival and Georgi of the reception was very helpfulread more

Hannah Young
14:45 17 Oct 19
A beautiful newly modern complex with apartments and houses. All white washed, clean streets and feels very safe. Super... close to the beach and puerto banus. It even has a huge supermarket and cute health food cafes within the vicinity.read more

Zbyněk
13:19 02 Oct 19
Well equipped comfortable apartment, beautiful garden nearby, very well-stocked supermarket on site, swimming pool for... all-day use, free parking near the apartment. The beach is about 40 minutes by a walk. If you go by car, you may have problem with parking near the beach. To your disposal is underground parking but for 0.09 EUR /min. Our priority was not lying on the beach, but trips to the surroundings, so we did not mind the distance of the beach. Ideal place for excursions (Ronda, Gibraltar, Caminito del Rey, ...) and after return refresh in the pool. Friendly staff, which gives you all necessary informations.read more

Jinan Shoubber
16:03 20 Aug 19
A lovely spacious flat,well equipped kitchen,very good sized living room and bathrooms.A very nice balcony. The only... problem was the location,as quite a long walk to town or sea in hot weather also buses nearby unreliable.read more

wilma magpie Windsong
10:36 14 Aug 19
Beautiful place if it wasn't for all rubbish lying around by the side of the streets...

Martin Boult
15:50 13 Aug 19
Stayed for a week, the apartment was spacious, clean, and had everything we needed, the grounds are kept well, theres a... local Mercadona,.and a brilliant little restaurant called Sisters right behind the complex, the appartments are approx 20 min walk from Puerto Banus sea front, but taxis were readily available,read more

Laura Caple
20:07 02 Aug 19
Good location but be warned no floats / lilos etc allowed in swimming pool which is a shame for children especially... over the summerread more

Yuko Y
20:33 22 Jul 19
We stayed in Fase 6 Apt 47. The building was nice but the unit was ordinary. The terrace was nice and spacious. Old... furniture and old appliances, nothing like the photos. The single beds in the 2nd bedrooms were tiny and had flat mattresses, okay for kids but not for adults. The second toilet didn’t flash properly. When the air-con is on, we can’t use any other electrical appliances like dishwasher or washing machine as the power trips, they did not tell us about this at checkin. Very annoying that the power keeps tripping as it is too hot to turn off the aircon . The lounge needs blinds or thicker curtains as it is way too sunny and hot during the day. Maybe it was nice 10 years ago, everting is very dated.read more

Garbhan Doyle
11:17 12 Jun 19
We had apartment 35 in phase 4. This is on the third floor and has two balconys, an upper and a lower. The place was... lovely and clean and we found it very a spacious apartment with an open plan. There is a view of the pool from living area and lower balcony and a lovely view from upper balcony. Sleeps 6 very comfortably, and is perfect for a group of friends or family. It is a 5 minute drive from Puerto Banus and 10 mins from Marbella. Taxis are also readily available. Lovely day time restaurants 4 minute walk located beside the supermarket which is very convient, especially on day of arrival. No issues with booking agency and all queries were handle with care and diligence.read more

Computers and Music trolley
07:14 04 Jun 19
The apartment that we stayed in was good, it could do with a little bit of maintenance with bathroom doors and drawers... in the wardrobes. But apart from that I could not fault it. The apartment was clean and spacious. We were near a wonderful Mercadona which sold everything and a couple of restaurants which were 5 minutes walk, you could walk into Puerto Banus which was a bout 15 minutes, but the taxis were very easy to get and cheap. The staff in the office were so helpful and really cheerful. We have booked to stay there again in August. Highly recommend.read more